Reflexology It is known that the feet have been used to promote good health for many years. Numerous ancient texts, illustrations and artefacts from early Chinese, Japanese, Indian, Russian and Egyptian times have been discovered and have been linked to modern foot reflexology.

In the early twentieth century Dr. William Fitzgerald developed modern zone therapy of the human body, each zone corresponding to a different part or parts of the body. 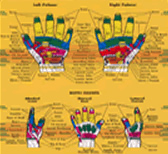 In the 1930’s Eunice Ingham a physiotherapist also studied zone therapy theory. Her studies proved that by applying pressure specifically to the feet was more responsive than any other part of the body. Eventually she mapped out the entire body onto the feet and discovered that by applying pressure to various points in one zone had an effect on corresponding parts of the body. In many cases reducing pain and inflammation and causing a deeply relaxed state.

The effects of Reflexology on the body

Reflexology has been shown to be effective for many ailments including:

“The Black Goddess” Kali is an ancient Hindu goddess, she is considered to be the destroyer of evil spirits and the preserver of devotees. She is the consort of Shiva. Kali destroys ego along with the demons of self delusion. The practice of yoga therefore aids the individual in eliminating the negative thought processes that hinder our development as human beings.